Warning: The use statement with non-compound name 'KWSContactList' has no effect in /var/www/vhosts/dev.thoroughbreddailynews.com/wp-content/plugins/constant-contact-api/admin/campaigns.php on line 2
 Perfect Reflection Caps Ideal Day 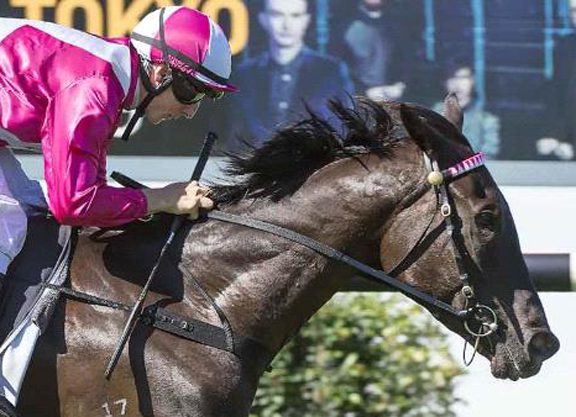 It is a special occasion any time that full-siblings win black-type races on the same card. When one of those siblings scores in Group 1 company–as Perfect Reflection (Aus) (More Than Ready) did at Ascot (WA) on Saturday–then the achievement is very notable indeed.

Perfect Reflection deserves particular credit because her victory made her the first 3-year-old filly to win the G1 Kingston Two Classic in that 2200-metre race's 40-year history. Earlier in the afternoon, her 4-year-old full-sister Ideal Image (Aus) had taken the Jungle Dawn Classic, a Listed race over 1400m. The siblings are with different trainers (Ideal Image with Adam Durrant, Perfect Reflection with Grant Williams), but both are raced by their breeders Bob and Sandra Peters, for whom their dam Reflected Image (Aus) (Bluebird) has been a terrific servant since they bought her at the Inglis Easter Yearling Sale in Sydney in 1998.

The Peters' first dividends from their purchase of Reflected Image came during her racing days. They brought her back to their home state of Western Australia, where she became one of Perth's top fillies of the 1999/2000 season. She won four races at distances between 1300m and 2400m, with the best of her victories coming in the G2 Western Australian Oaks over 2400m. They then retired her to stud as a 4-year-old in the spring of 2000, when she was covered by Honour and Glory.

After Reflected Image had been at stud for nearly a decade, it seemed as if her breeding career was going nowhere very fast. The filly who had resulted from that Honour and Glory covering, Western Sunset (Aus), had won a couple of minor races. Reflected Image's fourth foal Risktaker (Aus) (Orientate) had also won at the provincials (as well as being placed in town) and her fifth foal New Image (Aus) (More Than Ready) had won in Perth as a 2-year-old in the 2008/09 season to become the mare's first metropolitan winner. However, with no stakes performers to show from six foals of racing age, Mr and Mrs Peters entered the mare for Inglis' Easter Broodmare Sale in Sydney in April 2010.

As the sale loomed, though, they had a change of heart, and withdrew her from the auction. Since then, Reflected Image's breeding record has turned itself inside out.

It is fair to guess that the reason for the Peters' change of heart might have been that New Image seemed to be improving. Only three months after that sale, that filly started to fulfil the promise which she must have been showing: in July, she became her dam's first stakes performer by taking the Belmont Oaks, a Listed race at Belmont in Perth over 2000m. The following term New Image doubled her tally of black-type victories by taking the Matchmaker Classic over 1400m as an autumn 4-year-old in March 2011.

Since then, Reflected Image's record has got better and better. Mr and Mrs Peters have stuck to their strategy of keeping the mare in the east and bringing her offspring to race in the west. Key components in the success of this strategy have been two American stallions who have been among this century's most successful shuttlers to New South Wales: the aforementioned More Than Ready (who has compiled a magnificent record from his many seasons at Vinery NSW) and Elusive Quality, whose visits to Darley NSW yielded plenty of good horses. The fact that both stallions have sired at least one Golden Slipper winner speaks for itself. More Than Ready is responsible for both Sebring (Aus) and Phelan Ready (Aus), and Elusive Quality for Sepoy (Aus).

At the time of that Inglis Broodmare Sale in April 2010, Reflected Image was dam of three unraced offspring by Elusive Quality: a 2-year-old gelding, yearling colt and weanling filly. In time, the yearling became his mother's second stakes winner by taking the Belmont Classic over 2200m as a 3-year-old towards the end of the 2011/12 season. Now the aforementioned More Than Ready sisters, Ideal Image and Perfect Reflection, have taken Reflected Image's tally of black-type winners to four.

Reflected Image's dam Superb Prospect (Superbity) is typical of many of the mares who have been imported into Australia from the United States in recent decades, being a member of a tough family which had yielded plenty of stakes performers without having being an immediate source of superstars. She herself had been a good and very tough racemare in her homeland, winning 11 races including the Castle Forbes S. at Meadowlands. Her dam Prospector's Charm (Mr. Prospector) had been a good producer, breeding eight winners, and was a half-sister to the stakes winners Herecomesthebride, Acharmer, Rosy Spectre and Vivid Gold.

After coming to Australia for her breeding career, Superb Prospect conformed to type. She is (posthumously, nowadays) dam of eight winners including the Group 2 winner Reflected Image, while her many winning grandchildren now include one Group 1 winner and another six who have scored in Listed company.

Click Here for a free daily subscription to TDN.