Warning: The use statement with non-compound name 'KWSContactList' has no effect in /var/www/vhosts/dev.thoroughbreddailynews.com/wp-content/plugins/constant-contact-api/admin/campaigns.php on line 2
 Siyouni Stars On Arqana Day Three 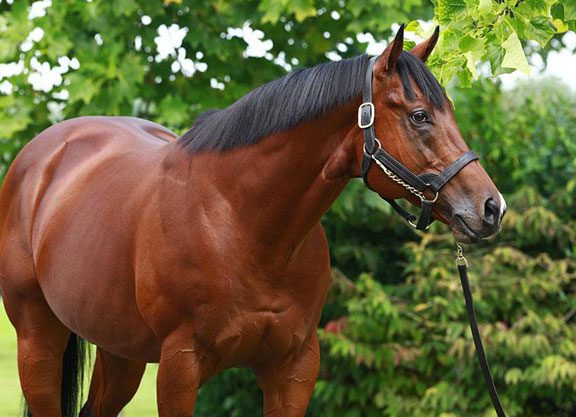 Siyouni (Fr), Europe's leading second-crop sire, was the star of the show at the Arqana December Breeding Stock Sale's cumulative session Monday, siring four of the top-five-priced foals, including a session-topping filly sold to Fairway Partners for €52,000.

The Siyouni filly (lot 559), a May foal from the Haras d'Engerville consignment, established the session-leading price early in the session when hammered down to Hubert Guy on behalf of the Fairway Partners, including Fairway Consignment principal Charles Briere, for €52,000.

“We were beaten several times yesterday so we stretched our budget a little for this filly,” said Guy. “We are this year again teaming up with Charles [Briere] to buy foals that will be re-offered as yearlings. We thought this one would make in the region of €40,000, but the sire is really on fire. We hope that she can make it to the Deauville August Sale.”

A daughter of Raven's Pass (lot 760) took second billing on the day among foals when selling to the Hayden Partners for €50,000 from La Motteraye consignment. A Siyouni colt (lot 622) purchased by Patrick Monfort proved the most expensive colt foal of the day at €46,000, and Siyouni was also responsible for a filly (lot 665) that cost Emerald Bloodstock €40,000.

The final session of the Arqana December Yearling Sale, which has a strong National Hunt presence, begins Tuesday at 11 a.m. local time.

With the sale taking on a more local flavor on the final day of trade Tuesday, it is safe to reflect on the participation of Americans in Deauville at the Arqana December Breeding Stock Sale. John and Leslie Malone's Bridlewood Farm made the greatest impact when purchasing the sale-topping mare Embellishment (Ire) (Galileo {Ire}) (lot 177) for €900,000, however, they were far from the only active Americans. Agent Justin Casse signed for three horses for €170,000 (click here for feature); WinStar Farm bought the filly Pickaway (Ire) (lot 178) from the Wertheimer and Frere consignment for €285,000 through agent John McCormack; Gordian Troeller and Jim Cassidy bought the filly Amboseli (Medaglia d'Oro) (lot 8) for €70,000; Calumet Farm bought Noisy Feet (Tapit) (lot 214), in foal to Starspangledbanner (Aus), for €175,000 through agent Mick Flanagan; and also in attendance were the likes of Jacob West, making his first visit, and Steve Young, Simon Callaghan, Leonard Powell, Christophe Clement and Runnymede Farm principals, who were also selling.