History, Tradition Blend With A New Future At Montaigu 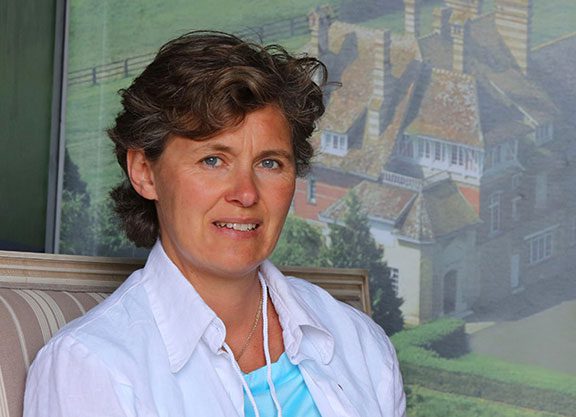 At the last two sales at Arqana, October and December, things got a little simpler at the former Haras de la Reboursiere et de Montaigu, or at least for those English-speaking salesgoers looking to remember the name of the popular French consignor. In October, the farm and consignment reverted to its original name and will now be simply known as Haras de Montaigu.

Other changes are afoot as well at the century-plus owned family operation. Montaigu, long known for breeding its own and raising and selling for a select group of clients, will now add to that list of services that of a consignor for outside clients as well.

And a fifth generation of the family has come on board to work in the family business. Sybille Gibson, the daughter of owner-manager and famed horsewoman and agent Aliette Forien, the wife of Gilles Forien, former director of Agence FIPS, has returned to the farm as marketing manager after decades away from Montaigu.

Gibson was born on the farm which was started by her great, great grandfather, Gabriel Guerlain. Guerlain was one in a long line of master perfumers for the family business, the famous French perfume line Guerlain, one of the oldest cosmetics, skincare and perfume houses in the world.

“The stud farm opened in 1903, was taken over by my great-grandfather, Jacques, and then my grandfather, Claude, who was an eminent member of the Societe d'Encouragement, and then my mother, who transformed the name Haras de Montaigu to Haras de la Reboursiere et Montaigu,” Gibson explained.

Now the Reboursiere name will be comprised of Aliette and Gilles's private broodmares, while the commercial Thoroughbred operation will revert to simply Montaigu.

Gibson's return to Montaigu is something of a homecoming. “I was born on the farm and I was there until I was 13 years old when I went to Paris. I've always loved horses, but I never worked in the business because I started a job in Paris immediately after my exams. I had the chance to work immediately, and so I took it.”

She married the English trainer Richard Gibson, who was stabled at Chantilly, had children, and then, she said, “to be honest, I asked myself for about 20 years, do I take over after my mom, or not? And one day, it became obvious. But it took me years to decide.”

Under Aliette's reign, the operation has enjoyed near constant success; they are perennially among the top consignors at Arqana, and sold and raised dual Group 1 winner Prince Gibraltar (Fr) (Rock Of Gibraltar {Ire}), who returns to the farm as a stallion this year. At the 2014 Arqana August sale, they consigned a million-euro yearling when Anthony Stroud purchased a daughter of Galileo (Ire)–Dance Secretary (Ire).

They stand four commercial stallions: the top jumping stallion Martaline; No Risk At All, who has covered a mix of over 130 flat and National Hunt mares in each of his first three years at stud and whose first 2-year-olds will race next year; Literato, a son of Kendor (Fr), who also stood at Montaigu and who was the G1 Champion S. winner whose runners tend toward precocity–all the runners from his 2012 foal crop won or placed at two–and Prince Gibraltar, who Montaigu offered at the Arqana August sale in 2012 but who did not attain his reserve and who raced for his breeder, Jean-Francois Gribomont. The latter takes up stud duties this year at the farm, and is a dual Group 1 winner, having won the Criterium de Saint Cloud at two and the Grosser Preis von Baden at four. He is in the process of being syndicated and he will stand for €5,000, said Gibson.

Her grandfather, Claude, was the first to choose to work strictly with horses and never regretted not being in the family business, said Gibson. “Claude loved the earth. His roots and my roots and my mom's roots are in the earth. So this was what he chose instead of the perfume.”

The farm comprises 360 acres about an hour and 15 minutes south of Deauville in the town of Nonant-Le-Pin. There are 16 full-time employees.

“One day, I will be fifth generation running the company,” said Gibson. “We are not transforming the business, because for many years we have been among the top five vendors at the sales, we produced a number of Group 1 winners, we don't want to change that. We've got a very good team who has been with us for a very long time and who are very specialized and motivated. But with my entry into the company, I would like to define our new business so that people know that we consign our own stock, and our client's stock, but I would like to let people know that we are also very pleased to consign outside horses. Our only aim is the highest quality service, to produce good horses and to satisfy our faithful clientele.”

“This is what we are looking to develop,” said Gibson. “We know how to do it, we have excellent yearling preparation, and we have had very loyal clients for years, and so why not do it as consignors?”

And at least now, for new English-speaking consignors, the name will be a lot easier to spell.

Click Here for a free daily subscription to TDN.

This story was posted in Shared News, Top News.