Let's Hear It For the Old Guys 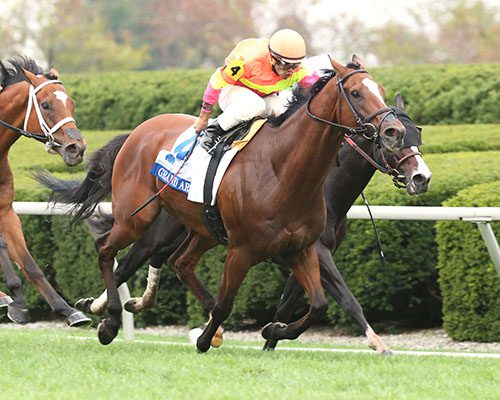 We've all seen the statistics. We've studied them, debated them, and have our theories on them. Thoroughbreds make fewer starts today than in decades past.

All of which makes it well worth noting the results of North America's graded stakes on Oct. 3, a huge day of prep races for the Oct. 30-31 Breeders' Cup.

There were 10 graded stakes that day for 3-year-olds an up, three restricted to fillies and mares.

Of the seven open to both sexes, two of the winners are age 6, three are 5 and two are 4.

In the races restricted to fillies and mares, the winners were a 6-year-old mare, 5-year-old mare and 4-year-old filly.

Three of the races were Grade I affairs; their winners ages 6, 6 and 5.

Maybe not old by Wise Dan's standard, but a breath of fresh air in a sport where so many fans bemoan the fact the best runners are usually shuffled off to the breeding shed at age 3 or 4.

This year, in fact, will not be remembered for any of the victories that happened Oct. 3. This is the year of American Pharoah … and rightfully so.

But Triple Crown winner American Pharoah is too valuable to continue racing next year. The stud farm that bought his breeding rights has every right to begin recouping its return on investment, and that is done in the breeding shed and in sale pavilions.

It is this dynamic that spurs another debate: Is Thoroughbred racing a business or a sport?

In fact it is both, and often at the same time.

It is a business for farms, breeders, agents, consignors and all those that work for them, with them, or on behalf of them.

It is a sport for the backbone of the industry, those whose dollars make up the pari-mutuel pools.

It is a sport and a business – though often more of one than the other – for the racetracks, those toiling on the backsides and all those connected to a track in one way or another.

We all know we need fewer racetracks and fewer race dates, but those are tough subjects to crack with so many vested interests.

Many of our claiming races are filled with geldings, but not so often in grade I races, contests trying to be won by those with stallion aspirations.

And filly and mare races are, of course, won by fillies and mares, though not many of the graded variety by 5 and 6-year-old mares that have usually visited a breeding shed, or two or three, by that age.

A quick recap of those grade I winners:

• Stephanie's Kitten (Kitten's Joy—Unfold the Rose, by Catienus), 6, mare, took the Flower Bowl for the second straight year. She has made 24 starts and won nine graded stakes and nearly $3.2 million.

Also on the day: 5-year-old Appealing Tale (Tale of the Cat—Appealing Bride, by Unbridled's Song) won the Kelso in his 25th start; 5-year-old Fioretta (Bernardini—Move Clickly, by Cherokee Run), in her 22nd start, took the Thoroughbred Club of America; 5-year-old Golden Sabre (Medaglia d'Oro—Strike Softly, by Smart Strike) was best in the Durham Cup in his 12th outing; and 6-year-old No Silent (Silent Name—Two Names, by War Chant) won the Eddie D in his 23rd start.

Applaud the owners and trainers. Celebrate the decisions to geld when necessary and to forego a season (or more) in the breeding shed when the racetrack still beckons.

These results will not, by themselves, magically correct the problem the industry faces of its participants making fewer starts. But it warms the heart by giving hope that breeders, owners and trainers will take note of these graded stakes winners and what they mean.

This story was posted in Op/Ed, Shared News.