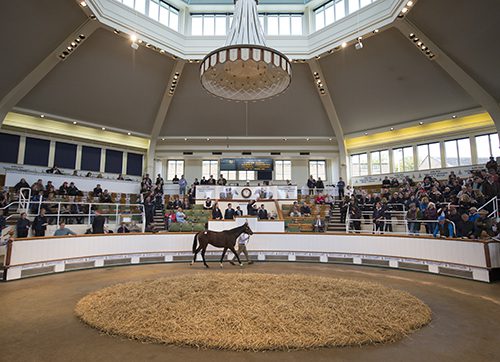 In comparison to last year’s edition, October 1 this year had 9% more horses catalogued and 11% more sold; the gross was up 4%, while the average dipped 6% from last year’s 235,935 gns. Overall, though, it was much like Keeneland, and much like Goffs: very similar to 2014. As you can see from the Weekly Sales Ticker, the October 1 gross jumped by 32% from 2011 to 2012, which marked the recovery in the European bloodstock market (it came a year later at Keeneland). In the three years since, the gross has increased by another 21%, or 7% per year, suggesting that growth has, well, more or less stabilized. But it’s also fair to point out that since 2011 the gross has increased by 60%, and the average by 57%, at October 1.

While the North American and European markets are similar, the two markets are far from identical. At October 1 this week, six buyers signed for 103 yearlings which grossed 41,745,000 gns and averaged 405,291 gns; 28% of the yearlings sold, and 50% of the money spent. The six were: Al Shaqab (32, according to our estimate from information compiled from the Tattersalls website); John Ferguson (23); Shadwell (15); M.V. Magnier (11, counting one signed for by Demi O’Byrne); South Africa’s Mayfair Speculators (12); and the China Horse Club (10). Some of the latter two were bought in partnership with other buyers, including with each other, but we have counted each yearling once. The salient point is: the 103 yearlings bought by these six buyers averaged 405,291 gns; the 269 yearlings purchased by all other buyers averaged 152,414 gns. Conclusion: there were two tiers in the October Book 1 sale–the ‘top six buyers’ tier, and the ‘everybody else’ tier. Four of these six buyers were active at Keeneland September, by the way–John Ferguson, Shadwell, M.V. Magnier, and the China Horse Club. Among them they bought 47 yearlings and spent about $18.5-million throughout the whole sale– not exactly a drop in the bucket, but not half the sale, either.

A total of 66 yearlings (18% of the 372 sold) were hammered down to buyers for 400,000 gns or more this week. The six big buyers accounted for 45 of those 66, and 16 other buyers signed for the other 21 yearlings sold for 400,000 gns or more, meaning 22 separate buyers signed for 66 yearlings which sold for the equivalent of just under $650,000 in American money at current exchange rates. Also interesting and significant: 21 different stallions sired these 66 yearlings. There were 13 sires which had four or more yearlings sell at October 1 for averages of 220,000 gns (about $350,000) or higher; in Keeneland September Book 1, just five sires averaged $350,000 or more with four or more sold, and one of those (Fastnet Rock) was European. The other four were War Front, Tapit, Medaglia D’Oro, and Distorted Humor.

Eight sires had three or more yearlings sell for 400,000 gns or more this week: Galileo (10), Dubawi (8), Shamardal (6), Oasis Dream (6), Frankel (5), Invincible Spirit (5), Nathaniel (4), and Raven’s Pass (3). But the fact that 21 different sires had yearlings sell for $650,000 or more, yet only six buyers accounted for 50% of the gross: what does this tell us? It may tell us that, in spite of the broader diversity of numbers and individual buyers of expensive yearlings in America, there is a very high concentration of elite buyers in Europe, and especially at this sale. It also might be telling us something about a subtle shift in the emphasis of elite buyers. In the old days, elite buyers tended to weight three elements relatively equally: the dam and ‘page’; the sire; and the individual. As good ‘pages’ became less available, that element became less important, and buyers concentrated on the sire and the individual. While the shift in emphasis is less pronounced than when the ‘page’ became less important, the results now suggest that the individual is weighted even more heavily. The sire is still important, but it may be that buyers are becoming more ‘broad-minded’, shall we say, about the sire than has previously been the case. If you bring the right individual, the buyers will rate that highest of all, and a higher number of sires become acceptable as the sires of $650,000 yearlings.

This actually has important implications for the yearling market. The sales companies have to just about wrestle consignors into putting horses in their respective Book 1s; everybody seems to think they’re somehow ‘better off’ in Book 2. But what Keeneland September Book 1 and Tattersalls October 1 prove is exactly the opposite. This week suggested the buyers come to a Book 1 expecting to find a certain level of horse, and they are falling over each other to buy ‘the $300,000+’ yearling. The sales companies understand this, and what is happening now is that a certain standard of individual is regarded by buyers as a legitimate ‘Book 1 horse’. We don’t need smaller Book 1s; in fact, the three-day Book 1 looks like exactly the right answer. Consignors need to realize that this ‘Book 1 psychology’ which buyers bring, along with their checkbooks, presents a great opportunity for top individuals with a little less pedigree–credible pedigrees, not ‘no pedigrees’–to become legitimate Book 1, $300,000+ (and even $650,000+) yearlings. There just can’t be 66 yearlings sell for $650,000 or more in three days without really significant demand for the top horses. Instead of racing for the middle, it would make more sense, in terms of proven market demand, for consignors to work with the sales companies to compile stronger, three-day Book One catalogues to bring to the best marketplaces the horses buyers really want to buy.

Bill Oppenheim may be contacted at bopp@erb.com (please cc TDN management at suefinley@thetdn.com). Follow him on Twitter at www.twitter.com/billoppenheim.

This story was posted in Shared News.